The Representative of Corwood Industries – Vocals, Acoustic and Electric Guitar, Bass and Drums 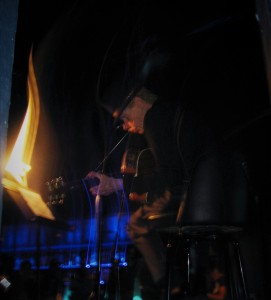 Imagine you find yourself in the ultimate dystopian incarnation of Los Angeles. Blade Runner come to life. A societal structure beyond the control of those who inhabit it. A basic social infrastructure still exits, although it’s unraveling daily. You still have paper currency, markets to buy food and goods, and if you travel to the darker, stranger recesses of the city, Art. Someplace, somewhere in a disintegrating megalopolis of 10 million, a band plays in a dank, dark temple of song, conjoined in the sacred audience/performer covenant. However, what band is this? And, what kind of music would they be playing?

Those were the pictures my mind painted while observing the dark and intense set by Jandek on a balmy Los Angeles Saturday. The Representative of Corwood Industries has not yet exhausted of his bag of tricks. He gifted us with a desperately energetic band of three women which produced a joyful noise laced with estrogen and innocence at ear splitting volume. The dark stage and club ambiance contributed to the illusion of being part of a very exclusive secret society. It was a thing to behold.

After the original performance venue, “The Church On York” lost its  permit, The Jandek performance went off as scheduled at the The Echoplex. The club was jammed with several hundred Jandekophiles. And, if my informal straw poll is accurate, the demographic of the typical Angeleno Jandek enthusiast skews decidedly towards anglo, polite, attractive, educated late-20’s to early 30’s Alternative music fans. Good demo for Jandek, bad news for the barkeep, who saw precious little activity at the watering hole. Of course, the seven dollar draft beers might have been a deterrent as well.

The common topic of pre-show conversation revolved around which Jandek would show up. Would he perform solo? Would he go ambient for a two hour stretch? Or, would he improvise on electric guitar atonally as he did on the live album “Houston Saturday”? To say there was a pre-gig buzz, would be an understatement. History was about to be made,  if only for a cult of a few hundred.

Jandek rewarded us with a generous sampler of his various musical personalities. The big surprise was the appearance of lead singer/spoken word artist Sheila Smith. She was pretty much group spokesperson and focal point while The Representative hopscotched from instrument to instrument. However, the show opened with The Artist sitting on a stool at the front the stage armed with his acoustic guitar and his voice. No “Hello Los Angeles!” was offered by the artist or desired by the audience. In fact the club was dead silent while the artist fiddled interminably with a plastic bag of ‘who knows what’ to retrieve a suitable guitar pick. I saw Andres Segovia perform at the Dorothy Chandler pavilion in the seventies. That crowd was unruly by comparison. This portion of the show consisted of prepared and composed acoustic songs, “Whiling The Night Away” and “Hallway”. Both were effective and very well received.

Jandek then put down the guitar and his charismatic female ensemble took over the stage. He grabbed the microphone and proceeded to engage in an improvised spoken word smack down with front lady Sheila Smith. The piece will probably end up with the title “I Got It” because the exchange revolved around who had what and why, although it was never specifically revealed what “it” precisely was. Smith played the role of “Da Rep’s” lust interest with sass and brio. Many in the audience wondered if the hormone drenched stagecraft on display was psycho-drama or the real deal. The Representative himself, was animated and engaged. He then strapped on a Fender Precision bass and more interplay with Smith ensued. This portion of the show was clearly performed without a net or prepared music. Jandek’s bass playing was inspired, energetic, and filled the room with his unique, harmonically ambiguous presence.

The Representative clearly was relishing his role as Zen Master of  chaotic convergence. The third act of the set saw the artist sit behind the drum kit. The ensemble out front jammed and free associated while the man himself proved a capable –albeit idiosyncratic -skin beater.

The fourth and last act saw our hero strap on an electric guitar and lead his ensemble in a classic Jandekian demolition of all discernable melodic or harmonic structures. Then, too soon, it was over and the man in black left the stage and disappeared into the night. An encore was desired and called for, but we all knew The Representative would not engage in such a hackneyed Rock and Roll convention.

After the concert, The Muse Patrol had the opportunity to speak with multi-instrumentalist Kris Bernard. She was a member of Jandek’s ad-hoc ensemble convened exclusively for the L.A. performance. She played bass and drums. Her back story is nearly as compelling as the performance itself. Kris had never performed on stage before May 24, 2014, and even more remarkable, had no prior musical training or experience on any instrument at the time of her induction into the group.

The Muse Patrol (TMP): Before the gig, were you familiar with Jandek’s music?

Kris Bernard (KB): “I was, I have a couple of his records. How all this came to pass is, I played one of the records for my boyfriend. He basically had a reaction that I thought was funny, so I tweeted that.”

(KB) : ‘I played a Jandek record for my boyfriend, he immediately hated it, mid-way through he said he wasn’t sure about it, and then by the end of side one he loved it.’ So I tweeted that”

(TMP): Which record was it?

(TMP): How were you contacted for the gig?

(TMP): Had you ever had any musical experience before you got up onstage with Jandek?

(KB) “No. Well actually as soon as I found out about the show. I have a friend who gives music lessons, so I got three hours with him, with a guitar, a bass and on drums. But it was a very limited amount.  And, I basically forgot everything since a month ago.”

(TMP) Remarkable, I would not have known you had zero experience as a musician.

(TMP) When you told Corwood that you had no musical experience, it didn’t matter?

(KB) “I think that was their preference.”

(KB) “I used to do web design, and now I’m project manager at a tech company.”

(TMP): As far as preparation, was there any rehearsal at all?

(KB): “No. I had anticipated there would be. We met at The Echo at 2:00 p.m. We waited a long time for the sound guys to get set up. Finally the sound guy went like, ‘do you guys want to try some of your instruments?’, At that point The Representative from Corwood said, ‘yeah, why not?’ Like it hadn’t been thought of before, But, because the sound guy suggested it, they’re like ‘OK, sure let’s do that’. So I picked up the electric violin and I just kinda started hacking away at that. And it sounded really rough. But that (sound-check) was basically the only thing we had other than a prepared set list which was not about songs, but just, ‘at this point you’ll work on this instrument, and at this point you’ll work on that one.’

(TMP): No keys or riffs or anything like that?

(TMB): You mentioned your boyfriend, was he in the band at all?

(KB) “Yes Marcus Savino, he’s the one who played at the end.”

(TMB): As regards free form music, it takes a certain fearlessness to stare down 300 people packed into a club. A lot of trained musicians won’t do it. Was there apprehension? Did you have to slam down a couple of Tequilas?

(KB): “Well, I definitely had some Tequila. But, I think, for me I was most comfortable on the drums. That was during the second set I played two songs on the drums. That was definitely my favorite part. At the third and fourth set, I was on bass. And the third set I was supposed to do some improv vocals and I don’t think I got anything out. So that was the least comfortable part for me.”

(TMP): I don’t want to get tabloid, but with Sheila onstage, there was a lot of sexual energy or interplay with The Representative. Was that shtick, or was there something going on?

(KB): “I don’t know the workings of their relationship.”

(TMP): So you never met Sheila before the gig?

(TMP): Do you think you’ll ever meet Jandek again?

(KB): “I would be surprised. Although I am from Texas. And so, I think I’ll be in Houston sometime this year. I’ll definitely try to reach out, but I don’t know if it will result in anything.”

(TMP): I want to get to the soul of the man. But I’m as interested as anybody else in preserving the mystique. Did he introduce himself to you as anybody?

(KB): “No. He didn’t actually introduce himself at all. At the point where there were introductions, he didn’t say a name at all. He just said hi. He was so nice. From what I’ve read from other press, he doesn’t refer to himself as Jandek at all, but instead, as The Representative. But he did not call himself that either.”

(TMP): After the gig did you toast each other or say ‘Nice Job’ or anything?

(KB): “Yeah, when it was just the five of us up in the green room, the Representative seemed to be really pleased with it. He said it was one of the best shows.”

(TMP) Did anyone mention that this show would be released on CD or DVD? Was it filmed?

(TMP): Now that this has happened, do you have any plans to pursue music?

(KB): “You know it’s funny, Marcus and I are together so I live with a drum set, but I’ve never played it ever. But it’s in my basement. I had so much fun with the drums, I think I’m gonna continue to play with it.”

The interview was winding down. Kris Bernard’s story was  compelling. However, my desire to get inside the soul of the man  was left unrequited. Then, before we rung off, Kris turned the tables and asked me a question……

(KB): “Can I tell you something he said before the show that I will probably have with me for the rest of my life?”

(KB): “One thing the representative said to all of us was…‘there are no mistakes, if you think you made a mistake, go further into that mistake, and then it’s not a mistake.’