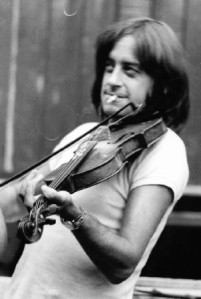 David LaFlamme was America’s electric violin pioneer during the late sixties. In Britain, it was David Swarbrick.  ‘Swarb’ was already folk royalty in Britain when the call came to join Fairport Convention in their desperate attempt to retool and recover after a road accident that claimed the life of drummer Martin Lamble. Swarbrick took the gig just in time to feature on the band’s 1969 masterpiece, “Liege And Lief”. Suffering and conquering the agonies of stone-age electric violin technology, Swarbrick found his inner rocker and became a star attraction in the band. He even multi-tasked as Fairport’s lead singer after the departure of Sandy Denny. Eventually, ear problems and other health issues forced his retirement from the band and active touring. He’s cheated death twice. Once after a premature obituary was published in the “The Daily Telegraph” in 1999; and again after a risky, but successful double lung transplant in 2004.  A living legend and a huge influence on British music.

For a brief time during the late sixties and early seventies, British Folk-Rock threatened to make a big splash on both sides of the Atlantic. It was old music played by young guns at high volume. This outdoor perfomance from 1971 is a period curio that captures the genre and Swarbrick at their peak.  This performace could also well be the precise time and place where the spirit of the sixties died…..