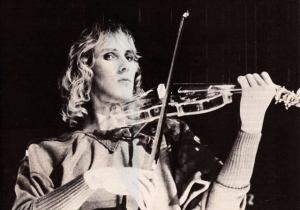 If  Mozart were reincarnated as a rock musician he would most likely come back as Eddie Jobson. Like Mozart, Jobson was precociously talented on both keyboards and violin from an early age. He was the featured soloist at the age of seventeen for B-list proggers Curved Air before Roxy Music snapped him up and made him a star member ( at age eighteen) of their studio and touring band for the next three albums. Due in part to Jobson, Roxy became one of the biggest bands in Europe.  His trademarks were a decidedly androgynous sex appeal and a custom made see-through Plexiglas violin.  Onstage, Jobson brought a glammy, confident swagger that enhanced the appeal of the electric violin as a Rock instrument.  After Roxy Music, Jobson said thanks (but no thanks) to an offer from Procol Harum  and joined the finishing school that was Frank Zappa’s road band in 1976.  After Zappa, he then established his own brand as both electric violinist and world class multi-keyboardist in the progressive all star unit UK.  After three albums, UK folded.  Jobson remained in the Prog elite-league as a member of Jethro Tull and was breifly a member of the 1983 platinum version of YES; going as far as to appear in the video for “Owner Of A Lonely Heart” before ultimately turning down the gig. King Crimson fans can also enjoy his work on the live album “USA”, where he surrepetitiously replaced much of the violin work of previous bowsman David Cross.

Jobson’s first legendary burst of genius was his epic electric violin solo on Roxy’s “Out Of The Blue”. After all that had gone on before, this 1975 electric violin solo finally demonstrated -once and for all- the boner inducing potential of the instrument in a Rock context. Eddie’s solo comes at the end of this video and is worth the wait.