In Hip Hop culture, songs about killing and murder are plentiful and omnipresent; so they will not be found on this list. However, the act of couching musical mayhem in a three-minute Pop music confection is truly subversive. Making it to mainstream radio and the TOP 10 chart is pure genius and shall be rewarded with a placing on this list.

Went to # 6 on the British Pop charts and was Jimi’s first hit.  ‘Joe’ is asked “where you goin’ with that gun in your hand?” Well, apparently he’s going to shoot his old lady down and high tail it to Mexico. He does just that. Hendrix was not only a gifted writer/singer in his own right, he made a habit of recording cover songs so definitively that they were rendered almost uninhabitable by any other artist. “All Along The Watchtower” is a classic example. “Hey Joe” would be another. 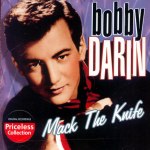 Number 1 on Billboard and won the 1959 Grammy for record of the year. Bobby Darin recorded “Mack The Knife” way back in 1958. It was actually an English  translation of a Bertold Brecht lyric taken from The Three Penny Opera. In this tune our main character commits his musical mayhem up-close and personal by stabbing. Darin’s Sinatraesque’ vocal styling combined with a bouncy big- band arrangement made this a hummable smash (and gash) hit for kids of all ages.

Written and released as a Single on Sun Records by Johnny Cash in 1955; it would finally go to Number 1 on the Billboard Country charts in 1968. To the best of our knowledge, the real Johnny Cash was an edgy but gentle giant who did great harm to nobody other than himself. However, like Ziggy Stardust, Alice Cooper, Bob Dylan and all uber alter-egos that came after, he inhabited his self-constructed mythology to perfection. When ‘The Man In Black’, states ” I shot a man in Reno just to watch him die”, we believe.

Written by Barry Mason and Les Reed. Tom Jones took it to # 2 in Britain and # 1 in several other countries. America rewarded the tune with a # 15 placing.  The Sensational Alex Harvey Band also had chart success with Delilah; taking it to # 7 on the UK chart in 1975. Set to waltz time and imbued with the lilt and bounce of a boardwalk carnival ride; Delilah actually chronicles the stalking and killing of a woman by an obsessed paramour. Tom Jones delivers this tune with operatic panache. while Alex Harvey adds a  campy desperation that is irresistible. I love both versions and declare the contest a draw.

Freddy Mercury kick starts this Queen masterpiece with no preamble or foreplay. First line in the song, “Mama, just killed a man, put a gun up to his head, pulled the trigger now he’s dead”.  What follows is a shotgun explosion of guitars, multi-tracked vocals and pure genius. There was never a # 1 hit like it before and none since. Ironically, the record company’s objection to the release of the track as a single had little to do with violent content, they just thought the track was too damn long

I Shot The Sheriff  (Eric Clapton)

Clapton went # 1 with a bullet (literally) with this lilting reggae ditty about cop killing. Black, dreadlocked composer (Bob Marley) had no luck navigating this tune past tight-assed American radio programmers. However, the comfy, boomer-certified Clapton brand was the perfect lubricant. ‘Sheriff’ gave Clapton a much-needed 1974 chart topper and also alerted American audiences to the world-class talent of Marley.