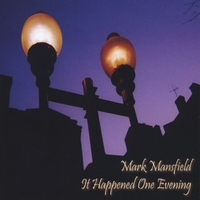 This is Mark Mansfield’s second solo release and is the finest album in his canon, which includes his under-appreciated and poorly promoted solo debut “Love’s Final Round”. Mansfield has also released multiple albums under the band name, “The Redeemers”. This new album contains recordings that predate all his previous releases. This album serves as an anthology of his earliest studio recordings from the 70s and early 80s. Additionally, it’s a prequel that documents Mr. Mansfield’s eclectic tastes before he fully immersed himself in 60s-style garage rock and country. All qualifiers aside, the thematic cogency of the songs confers on “It Happened One Evening” the gravitas of a standalone album.

The CD’s initial songs recorded in Hollywood boast a studio band that included future Plimsouls’ main man, Peter Case; Dickies’ guitarist, Glen Laughlin; and future Red Rockers’ drummer, Patrick Jones. The later songs, recorded in Washington, DC, were cut solo with Winwoodian efficiency and polish. The final result is a Proustian remembrance of things past — more than simply a collection of pop ditties — “It Happened One Evening” is a progressive song cycle that gains sustenance from that potent elixir, containing equal parts romance and innocence, though never entirely absent the chill evening mist of mortality. 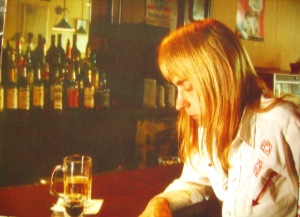 The title cut,which also opens the CD, establishes an atmosphere of autumnal twilightthat pervades the entire project.  Starry-night keyboards and earnest Anglo-tinged vocals evoke a dark pastel shade of melancholy that is both of its time and timeless. This is chamber pop from someone who had his life changed by the Beatles. And while the album never descends into slavish imitation, one cannot help but note swatches of Al Stewart and the Beau Brummels woven into the tapestry. Reinforced is the notion that sad songs are the most beautiful and can be attractively packaged with deft songcraft and a bearable lightness of being. The finest cut on the album is “Sad To Blue” (inexplicably buried seventh in the running order). It has an eerie, atmospheric vibe that carries the faintest whiff of Bryan Ferry’s earliest, spookiest, piano balladry. And, in a perfect galaxy, the lilting, sourball confection “The Underworld” would be a crossover MOR hit.

This attractively packaged and expertly remastered CD deserves a wider audience and more media attention than it will probably get. However, those who still bring any degree of imagination to their music listening will be greatly rewarded by “It Happened One Evening”.